Aevum Obscurum aka Das Tausenburgenspiel is a free online turn-based multiplayer strategy game, where you take the reigns of a budding empire and struggle against fellow players for control of Europe. In one game, up to 50+ players vie for supremacy, but only one can be victorious. Every game you win pushes up your score, until you don't just dominate Europe, but also your fellow players. Then all will be in your shadow and not just peasants, but even kings will worship you! 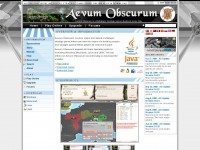